New Brookland Tavern had probably its best light show, and noise bands, I’ve seen this year with the Nothing performance on Dec. 9th, as the band winds down their 2021 segment of the tour. In tow were the bands Midwife and Bambara. I unfortunately missed Midwife, who I was looking forward to seeing most, but I had a friend who works at the venue tell me that it was a great set, which is all you need to know in order to make the decision to see them when they visit Columbia again. You can listen to Midwife AKA Madeline Johnston here.

Fortunately, I was able to witness the BAMBARA show. The band started off with “Miracle”, which set the tone wonderfully for the rest of the set. Red stage lights shone hard on the band, filtering through Reid Bateh’s mane, matching the angst and grit of the music and Reid himself, who scowled through the lyrics, which I wish were turned up just a bit more.

What I was able to hear, however, was extremely raw, to the point, and filled with imagery, sounding heavily inspired by Nick Cave and gothic songwriters of yore to this listener, while the music itself was driving and exciting post-punk. A highlight was Blaze on the drum kit, whose shirt was already off by the sixth song, “Monument”. William Brookshire on bass, as well, contributed some great vocal accompaniment to Reid’s lead to create some smooth beauty to the otherwise rugged, surf-tinged music.

Reid’s stage presence was perhaps the best part of the performance, though, such as when he knocked over the mic stand onto his bandmates on the second song, “Sunbleached Skulls.” On “Mythic Love”, their latest single, Reid’s on-stage antics reached what I thought was going to be its most interactive for the night, when he bent down to reach a member of the audience’s head to yell the lyrics at each other, while Will switched from bass to synth to produce some organ tones.

But Reid went a step further on set closer “Machete”, where he hopped down into the audience and jumped around the floor with them, to plenty of applause. The future of American post-punk is lit in blood-red with BAMBARA, who is incorporating plenty of experimental techniques to their live set, such as the lead guitar playing the strings with a drum stick as a bow on “Jose Tries to Leave”. You can listen to their 2020 album, Stray, here.

As the audience started to crowd the stage while Nothing began to warm up, it was nice to see that the venue was almost at full capacity. Happy to see the shoegaze revival still going strong. Speaking of shoegaze, that’s not the only genre the band is happy to incorporate- metal and hardcore influence are rampant across the band’s body of work. Deafheaven is as close as a contemporary can get. Lead singer Domenic Palermo didn’t introduce the band, he did something much more revealing- playing the same, effect-ladened chord into his amp for a minute to round off opener “Hymn to the Pillory”. As Domenic switched guitars, the sample for “Say Less” began, with clapping from the crowd as they recognized the upcoming song. As the band switched from verse to instrumental parts of the track, stage lights would turn from blue to a piercing white, as the fog machine spurted out a haze as it drowned the light.

This visual trick warranted price of the ticket alone. “April Ha Ha” turned the set into sludge as the bass player, Aaron Heard, turned his distortion to 11, lending to a very heavy sound, which contrasted wonderfully on the parts where it was just Kyle Kimball on drums and Domenic singing. By the fourth song, “The Dead Are Dumb”, which features a Twin Peaks style intro, Kyle goes shirtless, to some audience cheering, as they should.

“Vertigo Flowers”, with its mid-tempo riffing, induced lots of head-banging from the crowd, as the whispered vocals washed over our heads. “The Carpenter’s Son” was the slowest song of the set, but it was a cathartic release of the tension and existential tone of the previous songs. An airy and beautiful piece that was one of my hits of the night. But then Nothing kicks you back in the face with “Famine Asylum” where the distortion is dialed back up to 11, with a sonic onslaught of drums and guitar towards the latter half of the track, where I felt my soul start to tear itself away from me because of the amount of noise that was assaulting my ears.

My favorite of the show. Before “Catch a Fade”, Domenic gives a shout out to Kyle on drums, and thanks us all for coming out and “staying safe and all that shit”. He cracks a joke about Florida being the “final boss of the tour” to some audience laughter and introduces the next song being “about tipping your bartender.” During “B & E”, one of the audience members tried to start a mosh pit, but just ended up pissing another guy off and almost starting a fight. The song, however, was another great example of heavy guitars and soft whispered vocals with great accompaniment from Doyle Martin on backup vocals.

As the band got together to talk about adding one more song to the show, same guy who tried to start the pit said “Whoop whoop” just like the way it reads, and the crowd let out a laugh. Domenic shook his head and smiled, and then Kyle mutters “Bing Bong” to some more crowd laughter. “Whoop whoop” guy heads to the bar, yelling “Bing Bong” along the way. Great stuff. Domenic dedicates the last song to Joe Biden, titled “Bernie Sanders” which ended the set with the guitars fading out and Domenic letting out the final lyrics, ending off the set on a comic, but high note. Speaks volumes about a band when their set list is written on a cup, whatever that means. You can listen to their latest album, The Great Dismal, here.

It's great seeing bigger bands travel down to New Brookland Tavern here in Columbia, and I’m excited to see what 2022 brings to the classic venue! Thanks to everyone who showed up to the show and keep coming out to more shows to support local venues and bands.

All photos taken by Bayly Hunter! 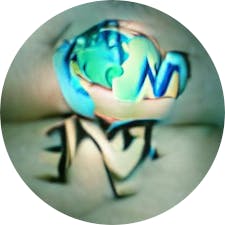 Playing the music my Ecuadorian mother raised me on to spread the polyrhythmic essence of cumbia, salsa, merengue and more.